Virtual Infantry in the Civil War

Welcome to our virtual fall 2020 program, Infantry in the Civil War. The health and well-being of our members is our top priority, so we have converted the original program to a virtual platform via Zoom. Portions of the conference will be pre-recorded, but all tour guides will be LIVE via Zoom for commentary and questions.

This virtual conference will only happen if at least 50 people are registered by September 15. We know this is completely new territory, and the format may not be well-suited for  everyone. We sincerely appreciate your support as we try to navigate a very difficult situation.

Virtual Tours will include Longstreet?s assault on July 2 at Gettysburg, the fighting in the West Woods at Antietam, Jackson's attack at Harpers Ferry, and the Confederate assaults at Monocacy. Lectures will cover some of the great infantry fights of both the Eastern and Western Theaters of the Civil War. This deviates from our normal pattern of studying a single battle or campaign and allows us to expand our studies.

· A waiting room will be enabled each day to verify each person is registered for the conference.

· Each participant will receive a packet of tactical maps via mail before the event.

· Parts of the conference will be pre-recorded and shown during the Zoom call. All tour guides and speakers will be live on the Zoom call for commentary and questions.

· Civil War & More Book Vendor, Jim Schmick, is our preferred book vendor. He will be available during the conference if you would like to order books from him.  Please patronize this local business!

One of the critical turning points in the 12 hour bloodbath called Antietam was Gen. John Sedgwick's attack into the West Woods. Had this attack been successful the day would have quite possibly ended with the destruction of Gen. R.E. Lee's Army of Northern Virginia.

· East Woods to survey the terrain, and discuss the decision making process that led to Sedgwick's attack

· Dunker Church and the high ground behind it. Here an incursion into the West Woods occupied this important high ground

· Hauser's Ridge to survey the defensive position of the remnants of Jackson?s forces, and an overview of McLaws' counterattack

The Battle of Harpers Ferry, prelude to Antietam, often is defined by Stonewall Jackson's mountain-top siege artillery. Stonewall's infantry tactics, however, ultimately doomed the Union garrison. Explore the surprising terrain of Bolivar Heights and School House Ridge as we examine Jackson's options and decisions, ultimately producing the largest surrender of U.S. forces during the Civil War.

· From Pikemen to Lignard: The Evolution of the Infantry in Western Militaries to the Civil War - talk by Christopher S. Stowe

​Stowe will discuss the evolution of the infantry arm, focusing upon its cultural, organizational, and doctrinal development during the two centuries leading up to the American Civil war--a period during which it allegedly earned its enduring moniker "the Queen of Battle."

Interested in more reading? Ask Jim about his inventory with Civil War & More.

On the afternoon of July 2, Confederate Generals Robert E. Lee and James Longstreet launched a massive assault against the Army of the Potomac's left flank. The brutal attack was one of the Civil War's largest, yet historians continue to debate the objectives and outcome. What was Lee trying to accomplish? How did General Dan Sickles's unauthorized movements toward the Emmitsburg Road impact the Confederate attack and the Union defense? How important was Little Round Top to the Union victory? Was July 2 the true turning point of the battle? Join Gettysburg Licensed Battlefield Guide and author James Hessler as we examine the many controversies associated with Longstreet's attack and Sickles?s defense of July 2.

Interested in more reading? Ask Jim about his inventory with Civil War & More.

7:30 to 8:30 p.m. Informal discussion on Invasion of Harrisburg, June 27-30 Carlisle to Harrisburg. Talk given by Jim Schmick with collection of photos and maps.

Our The Battle of Monocacy, fought July 9th, 1864, was part of the third Confederate invasion of the north. This day long delaying action saw the implementation of both traditional and innovative infantry tactics on the rolling fields outside Frederick, Maryland. Everything from the tried and true battle line to a rudimentary version of the small unit tactics used today. Join us as we explore the infantry tactics and maneuvers utilized by both sides during this often overlooked battle.

· Monocacy National Battlefield Visitor Center - On the grounds of the CSA staging area, we will have a brief overview of how the armies got here and why.

· Best Farm, Union and Confederate skirmishers and sharpshooters squared off on this property around 8:30am.

· Thomas Farm, The heart of the battlefield and the site of the most intense part of the struggle. This portion of the tour will have some walking as we discuss the shifting battle lines 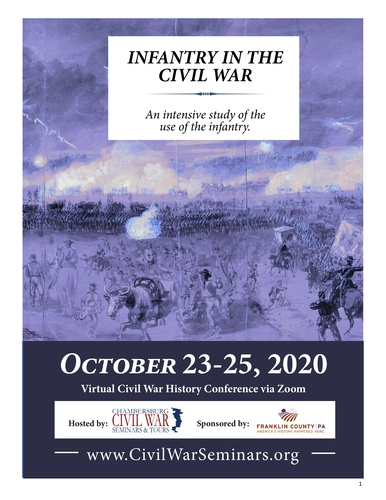 Zoom
Login information sent to those registered prior to the conference.

Our original conference structure has changed to a virtual format due to COVID-19. This conference will only happen if at least 50 people are registered by September 15. If there is not enough interest, it will be cancelled and full refunds issued.