Zoom Login information sent to those registered prior to the conference.

Our original conference structure has changed to a virtual format due to COVID-19. This conference will only happen if at least 50 people are registered by March 1. If there is not enough interest, it will be cancelled and full refunds issued. 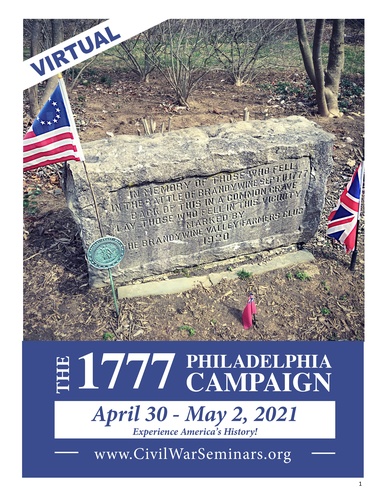 Welcome to our virtual spring 2020 program: The 1777 Philadelphia Campaign. The health and well-being of our members is our top priority, so we have converted the original program to a virtual platform via Zoom. Portions of the conference will be pre-recorded, but all tour guides will be LIVE via Zoom for commentary and questions.

*Please note this conference will only happen if at least 50 people are registered by March 1, 2021.*

· A waiting room will be enabled each day to verify each person is registered for the conference.

· Each participant will receive a digital packet of tactical maps. If you would like the packet mailed to you via UPS, there is an additional $15 fee.

· Parts of the tours will be pre-recorded and shown during the Zoom call. All tour guides and speakers will be LIVE on the Zoom call for commentary and questions.

10 - 10:30 a.m. Orientation Lecture: Overview on the opening of the campaign including sea voyage, Continental indecision, Cooch’s Bridge, Brandywine, Battle of the Clouds, Skirmish at Valley Forge and Paoli.

Our first tour day will focus on August 25-September 21, 1777.  This period covers the British landings in northeastern Maryland, the engagement at Cooch's Bridge in northern Delaware, the Battle of Brandywine, the Battle of the Clouds, the September 18, 1777 skirmish at Valley Forge and the Battle of Paoli.

· Cooch’s Bridge Site— site of the first land engagement of the 1777 Philadelphia Campaign. It was the first ever engagement in which the American light infantry were engaged.

· Brandywine Battlefield -  site of the largest land engagement of the American Revolution.

· Battle of the Clouds—The September 16 action that could have destroyed Washington’s army. While minor skirmishing did take place, a massive rainstorm prevented a full-scale engagement.

· Washington Headquarter site at Valley Forge—today, Valley Forge National Historic Park is preserved as the site of the Continental Army’s 1777-1778 winter encampment. This stop will focus on the skirmish that took place here on Sept. 18, 1777 near the future site of Washington’s headquarters involving Light Horse Harry Lee and Alexander Hamilton.

· Paoli Battlefield - where Anthony Wayne’s continental division was surprised and overrun in the middle of  the night by a British assault column. This is arguably the site of the oldest battle monument in the country.

·  “An Opportunity of Annoying Them Greatly” The Battle of Cooch’s Bridge (3 September 1777) - The Opening Engagement of The Philadelphia Campaign and the Invasion of the Upper Delmarva Peninsula - talk by Wade P. Catts, RPA,

The opening engagement of the Philadelphia campaign, the Battle of Cooch’s Bridge (or Iron Hill) was a short but spirited engagement between the vanguard of the British army and an American Light Infantry Corps. The presentation integrates historical, topographical, and archaeological studies into a discussion of the battle and its context, using contemporary British, Hessian, and American accounts to reconstruct the course of the engagement, the landscape over which the battle was fought, and the battle’s outcome.

Our second tour will focus on the efforts by the British high command to combat American fortification along the Delaware River and open access to British shipping. This tour will focus on early October through mid November, 1777 and the sites of Fort Billingsport, Fort Mercer, and Fort Mifflin.

· Fort Mercer and Whitehall House—earthwork at Fort Mercer was the site of a massive Hessian assault on Oct. 22, 1777 in a further British effort to open the river to British shipping.

· Fort Mifflin—while Fort Mifflin was significantly altered in the years following the American Revolution, the site witnessed one of the most sustained sieges of the war in October-November 1777 and witnessed heroic efforts by Continental soldiers to defend what was once an island fortification.

"Remember Paoli", it is the nation's first battle cry and was born of the battle that was fought in Malvern, PA on night of September 20th, 1777. Learn about how British General Charles "No Flint" Grey lead around 2,000 men at night into the Great Valley to surprise over 2,000 of General Anthony Wayne's men and 2,100 Maryland Militia under General William Smallwood. The ninth bloodiest battle of the Revolutionary War left Philadelphia open to British occupation, and also left a lasting impact in the local community. In 1817 the second oldest War Memorial was dedicated and is still remembered today with the Malvern Memorial Parade. Let's explore why this battle is called the "Paoli Massacre," as well as common myths such as soldiers being asleep during the attack. General Anthony Wayne would get his reputation back during the Battle of Stony Point, NY in which he used lessons learned from the Paoli Battle to earn a complete victory and international acclaim.

10 - 10:30 a.m. Orientation Lecture: Lecture on second half of the campaign including the occupation of Philadelphia, Battle of Germantown, Engagement at White Marsh and Valley Forge.

Our third and final bus tour will focus on the land campaign of September 22 through late December 1777.  This period covers the Battle of Germantown, the engagement at Whitemarsh, and the eventual encampment at Valley Forge.

· Peter Wentz House—the site of Washington’s headquarters prior to the Battle of Germantown and where he planned the assault on the British garrison at Germantown.

· Cliveden—the home of Benjamin Chew where numerous American assaults were launched on the house that was held by a small British force during much of the battle.

· Valley Forge National Park—site of the American winter encampment during 1777-1778 and where Baron von Steuben famously trained the Continentals to be a professional military force during much of the battle.

Most accounts of troop movements on 9 September and 10 September 1777 credit Sir William Howe with a fast and clandestine re-deployment of his forces on 10 September which caught George Washington and the Continental Army off guard and afforded Howe a day's worth of time to finalize his plans and deploy his troops for the battle on 11 September. An in-depth look at British and American troop movement during the 24 hours before the first exchange of fire on 11 September 1777 shows that Washington was well aware of British troop movements and had his forces in place well before Howe reached the vicinity of the Brandywine river.