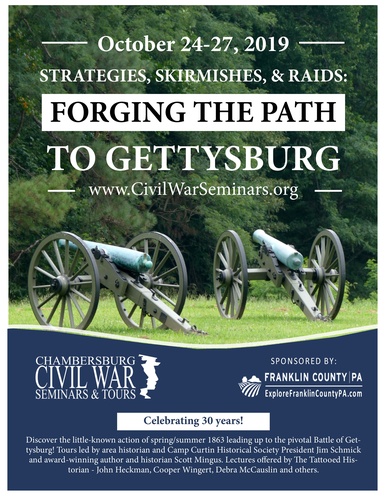 Click here for the brochure and pricing: Forging the Path to Gettysburg Civil War History Conference

We are excited to host this conference with a fantastic array of tour guides and interactive presentations focused on our Civil War Heritage! Discover the little-known action of spring/summer 1863 leading up to the pivotal Battle of Gettysburg! Tours led by area historian and Camp Curtin Historical Society President Jim Schmick and award-winning author and historian Scott Mingus. Lectures offered by The Tattooed Historian - John Heckman, Cooper Wingert, Debra McCauslin and others.


Special thanks to our Grand Sponsor: Franklin County Visitors Bureau!

As you know, part of  our efforts through the seminars is to raise funds and awareness for education and battlefield preservation. We have raised more than $215,000 and through your help we hope to raise more this October. Thank you for assisting in this endeavor. We are proud of our strong Civil War heritage, and look forward to sharing it with you at this conference.

Thursday, Oct. 24
Breakfast at Hampton Inn (avail. 6 - 10 a.m.)
8:30 a.m. - 5 p.m. “The Confederate Invasion of Harrisburg’s West Shore”  bus & walking tour led by Jim Schmick
· Bus leaves from Hampton Inn
· Lunch included
· Dinner on your own
Bus Tour Description:
In spring 1863, Gen. Robert E. Lee marched north planning to gather supplies and take a northern stronghold – Harrisburg, the capitol of Pennsylvania. Gen. Jenkins troops made it 3 miles from Harrisburg before being ordered to turn around and head to Gettysburg. Discover the actions leading up to the pivotal Battle of Gettysburg with Jim Schmick, area historian and president of Camp Curtin Historical Society. Follow in the footsteps of the Confederate troops as they made their way to Carlisle, Mechanicsburg and Camp Hill trying to take control of Harrisburg. You’ll tour important Civil War historical sites covering Carlisle towards Harrisburg that will explain how and why the troops ended up in Gettysburg.
Sites to visit:
· Cumberland County Courthouse visiting the original 1846 courtroom
· Cumberland County Civil War monument
· Sites pertaining to Lt. Gen. Dick Ewell and    J. E. B. Stuart’s occupation from June 27-July 1, 1863 as well as sites pertaining to General Jenkins brigade
· Confederate Brig. Gen. Albert Jenkins Headquarters and historical marker*
· Sporting Hill & Original Bank Barn – site of two days of fighting, which is the northern most point of action in the Gettysburg campaign. You’ll enjoy a visit to the original barn where Confederates took cover while engaging Union soldiers along the Carlisle Pike.*
· Samuel Albright House – Confederate artillery position*
· Oyster’s Point – site of a skirmish during General Jenkins reconnaissance to observe the defenses of Harrisburg. This marked the farthest advance toward Harrisburg by any Confederate force.*
· Bridgeport Heights – where Union troops were stationed in Lemoyne*
· Fort Couch Monument – site of the Union stronghold to protect Harrisburg from an invasion. It was erected under the direction of General Couch.
**Many original buildings are still standing. An asterick beside a stop designates there will be a wayside marker.
Friday, Oct. 25
Breakfast at Hampton Inn (avail. 6 - 10 a.m.)
8:30 a.m. – 5 p.m. Sessions at Hampton Inn
· Lunch included
· Dinner on your own

Topics to discuss include:
· “’The Rubicon will be crossed again’: The Confederate Invasion of Pennsylvania” - talk by James Broomall of the Civil War Center at Shepherd University
à  The political and military implications of Gettysburg are clear, but the designs of leaders did not necessarily frame the ways in which soldiers perceived and ordered their daily existence. Drawing upon the letters and diaries of Confederate soldiers and officers, this talk will consider the invasion of Pennsylvania with a view from the ground. The campaign’s long marches and material deprivations shaped how Confederates’ responded to and understood the great Northern invasion. Ultimately, military life had joined white Southerners together and created an unfamiliar environment to which many grew accustomed, but subtle doubts continued to surface, prompting some to question how much longer they could endure the army.

· Eating on the Go: What Soldiers Consumed during the Gettysburg Campaign  - John Heckman, The Tattooed Historian
à  One often overlooked facet of two great armies on campaign is the food they were issued and those they foraged for. If, as Frederick the Great stated, an army, like a serpent, moves upon its belly, then to gain a better understanding of morale and fighting effectiveness, we must look to the stomachs of those in combat. What foods were troops issued on campaign? What did they find while foraging, and how did they prepare their meals?

· First to Fall: The Life and Death of George W. Sandoe—Debra McCauslin
à   Adams Countian George Washington Sandoe died on June 26, 1863, as Confederate troops made their first assault on Gettysburg. Mustered in just three days earlier, 20-year-old Sandoe served Capt. Bell in Company B, Pennsylvania Independent Calvary. While scouting roads around town, Company B encountered the enemy at McAllister’s Mill, an Underground Railroad stop along Rock Creek. There Pvt. Sandoe was struck by a bullet and killed. He is the only soldier of his rank to whom a battlefield monument is dedicated.

1 - 5 p.m. Sessions Cont.
· Communities along the Mason Dixon Line during the 1863 Confederate Invasion - talk by John Miller
à  The residents of Emmitsburg, Maryland; South Mountain and Waynesboro, Pa saw lots of activity during the Confederate Invasion of Pennsylvania in June 1863. This discussion will cover troop movements, encampments and the skirmishes that took place during those days leading up to the Battle of Gettysburg.
· “Robert E. Lee, Stonewall Jackson and the Pennsylvania Campaign of 1863” - talk by Dr. Chris Keller
à  Lee and Jackson began planning what became known as the Pennsylvania Campaign in early 1863, well before the Battle of Chancellorsville where Stonewall was accidentally shot by his own men.  This talk explores what they had in mind, how the loss of Jackson concretely affected Lee, his planning, and army reorganization before the campaign, and explains how the loss of Lee's "right arm" created second- and third-order effects that bore ill fruit operationally and tactically at Gettysburg.
· Orientation of Jubal Early’s March to the Susquehanna River—talk by Scott Mingus
à  This talk will provide background information and an overview of the Saturday bus tour: “Flames Beyond Gettysburg.”

Bus Tour Description:
On June 26, 1863, 6,000 men in Gen. Jubal Early’s Division left camp in Franklin County and began advancing through the heart of Pennsylvania. The army’s actions swayed the movements of the advancing Union which now moved eastward toward the threatened city of Harrisburg, and away from the Confederate supply and communications line. On June 28, the bridge across the Susquehanna at Wrightsville was burned, and Early’s men were ordered to join Lee’s forces in Gettysburg. Jubal Early’s Raid is one of the crucial events leading up to the Battle of Gettysburg.
Sites to visit:
· Caledonia Furnace
· Site of U.S. Army General Hospital—one of the largest military hospitals in PA during the Civil War
· Site of the training camp of the 6th New York Cavalry
· Highlights of Jubal Early’s occupation of York
· Wrightsville discussing the defense and river crossing
· And more!

à In June 1863, Pennsylvania state and Federal officials scrambled to assemble a force large enough to hold off Robert E. Lee’s advancing Army of Northern Virginia. While Pennsylvania hastily and belatedly assembled a series of militia units, the state of New York provided a better organized, if inexperienced contingent of regiments to head off the Confederate threat. Although many of the militiamen jested that their only experience was of “street parades” and not combat, these units played crucial, though often overlooked roles in the Gettysburg Campaign. From demonstrating against the Southern vanguard as far south as Chambersburg, engaging in skirmishes with Confederate cavalry near Harrisburg and Carlisle, and joining in the effort to cut off Lee’s path of retreat to Virginia, this talk will explore the story of New York and Pennsylvania militia during the tumultuous summer of 1863.

Conference Completion
Thank you for your patronage!