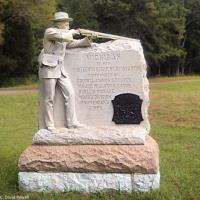 · Check-In will be in the hotel lobby about 1 hour before the day’s activities begin. You only need to check-in once.

· Classroom sessions will be held at the Farm to Fork facility at 120 General Lee Drive in Ringgold, Ga (This is a short walk for Hampton Inn Guests.

· Bus tours will leave from the Hampton Inn parking lot at the specified time. 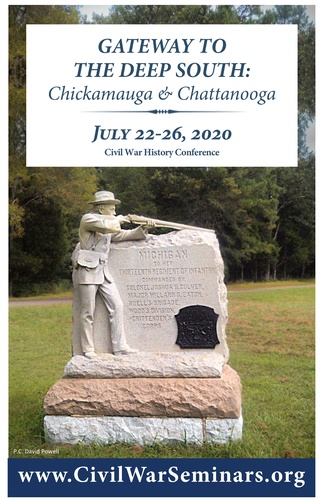 Our plans to host Gateway to the Deep South: Chickamauga & Chattanooga from July 22-26 will have to wait until 2021. Despite our hopes, the current Coronavirus situation poses too great of a risk to our participants, guides and team at this time. However, we will host this conference from July 21-25, 2021 based in Ringgold, GA with David Powell as our lead guide. We will be in touch the week of June 1st to process full refunds.

On a happier note, we are planning virtual gatherings via Zoom including a Meet & Greet so we may still visit with each of you! Stay tuned for updates on this as we get those details ironed out.

We are full steam ahead on planning our Infantry in the Civil War conference for October 22-25, 2020. Again, we will keep close tabs on the Coronavirus situation and will have the proper safety and health protocols in place.

We look forward to seeing many of you soon – perhaps even virtually! We’re very sorry for the cancellation and sincerely hope you and your families are staying well during these turbulent times.

​
Click here for the brochure and pricing: Chickamauga & Chattanooga

​
POLO DETAILS: We are pre-ordering Civil War Seminar polos that will be dark green with our logo - available for pick-up at the conference. Cost is $35 and they will not be for sale at the conference. If you'd like to order one, you may contact Lark at 717-264-7101 ext. 206 or order it when you register for the event. Men's sizes XS - 4XL.

Conference based at Hampton Inn at 6875 Battlefield Pkwy, Ringgold, GA 30736. All participants are responsible for arranging hotel accommodations for the seminar, which is not included in tour price. $125/night double occupancy plus tax. Special pricing for participants based on room availability.

​Click here for the brochure and pricing: Chickamauga & Chattanooga

· Check-In will be in the hotel lobby about 1 hour before the day’s activities begin. You only need to check-in once.

· Classroom sessions will be held at the Farm to Fork facility at 120 General Lee Drive in Ringgold, Ga (This is a short walk for Hampton Inn Guests.

· Bus tours will leave from the Hampton Inn parking lot at the specified time.

On August 22, 1863, Union artillery shells fell into the city of Chattanooga. As a Union deception force menaced the city directly, other Union forces began crossing the Tennessee River at points downstream; at Bridgeport, Stevenson, and Battle Creek. William S. Rosecrans’s campaign to capture Chattanooga and defeat the Confederate Army of Tennessee had begun. The Federals faced massive obstacles; the river, several mountain ranges, and an expanding Confederate army, swollen with reinforcements. We will explore this rugged terrain and gain a greater appreciation of those obstacles.

· Whiteside Tennessee – Running Water Gorge, one of the rail bridges that had to be rebuilt by Federal troops.

· Tunnel Hill GA – the limit of the Federal advance in September 1863, and were Nathan Bedford Forrest was wounded.

· Ringgold wayside, the Patrick Cleburne Statue – erected in 2009 to commemorate Cleburne’s fight at Ringgold in November 1863.

· Ringgold Depot – Used by Confederates before and after Chickamauga as a supply base, and where the great locomotive chase terminated.

The rest of the evening is yours to explore the area.

Held during the lecture portion of the conference, historical artifacts and other items will be available for bid throughout the day. The auction will close and winners announced at the end of the day. All proceeds support battlefield preservation. Please help us support the preservation and education of America’s history!

· Lectures held at Farm to Fork Banquet room at120 General Lee Drive in Ringgold, GA. This is a short walk from the Hampton Inn.

Chattanooga offered the Federal army access to the Deep South and the Confederacy’s burgeoning military-industrial base, via the gap carved through the Southern Appalachians by the Tennessee River. It also offered access to East Tennessee, hotbed of Unionist sentiment and deemed crucial by no less than Abraham Lincoln. As such, Chattanooga was a vital Union objective from 1861 until it finally fell into Federal hands in 1863.

Chickamauga, Bloody Battle in the West: David A. Powell, author of the Chickamauga Campaign

The campaign and battle of Chickamauga, from the crossing of the Tennessee to the retreat to Rossville, August 22 to September 21, 1863. A campaign overview of the complicated strategy executed by Union General William S. Rosecrans to force the Confederate Army of Tennessee under Braxton Bragg to abandon Chattanooga on September 9, and the subsequent maneuvering that brought the two armies together along the banks of West Chickamauga Creek. Includes an overview of the action, September 18-20, 1863, the defined the battle itself.

By 1863, the Confederate leadership differed sharply over how best to defend the Confederacy. The South lacked the men and resources to defend everything, but no region was willing to be sacrificed in order to concentrate those sparse resources elsewhere. Both parochialism and strategic reality too often worked at cross purposes. It was all the more remarkable, then, that the Confederate President Jefferson Davis agreed to transfer an entire army corps out of Robert E. Lee’s army in Virginia to travel to Georgia, there to aid Bragg in the defense of Chattanooga.

· Lectures held at Farm to Fork Banquet room at 120 General Lee Drive in Ringgold, GA. This is a short walk from the Hampton Inn.

Holding the line on the River of Death, Minty and Wilder, September 18, 1863: Eric Wittenberg, author of numerous works and expert on Civil War Cavalry operations

The Battle of Chickamauga began with a series of holding actions conducted by two Union mounted brigades, facing off against two Confederate infantry corps. The actions of Brig. Gen. Robert H. Minty’s Union Cavalry Brigade, at Reed’s Bridge, and Col. James T. Wilder’s mounted infantry command, at Alexander’s Bridge were collectively responsible for badly delaying Braxton Bragg’s planned offensive. They bought precious time for Rosecrans to react, and set the stage for the much heavier fighting of September 19 and 20. Taken together, these Federals’ delaying action was one of the more remarkable examples of cavalry screening conducted during the war.

The confusion stemming from William Rosecrans’ overly-complicated order to divisional commander Thomas J. Wood to “close up and support” fellow divisional commander Joseph Reynolds created catastrophe on the Union right. When Wood pulled out of line to try and execute that order, he opened a hole in the defense that was almost immediately exploited – albeit unintentionally – by James Longstreet’s massed attack of Confederate infantry, arrayed in five lines 600 yards east of the Brotherton cabin. The resultant breakthrough routed one third of the Union army.

The Battles for Chattanooga: Dave Powell

On September 21 the Federal Army of the Cumberland retreated into Chattanooga. Unable to secure the high ground of Missionary Ridge and Lookout Mountain, Rosecrans abandoned those locations to Bragg’s Confederates. Within days, the Army of the Cumberland was besieged. Over the next two months, both sides maneuvered for advantage. Bragg tried to sever Rosecrans’ remaining supply lines, while Federal reinforcements sped to Rosecrans’ aid. Rosecrans was replaced, with a new man, Ulysses S. Grant, coming to take personal charge of the effort. Collectively, the battles of Brown’s Ferry and Wauhatchie at the end of October, coupled with Lookout Mountain and Missionary Ridge a month later in November, ended that siege and drove the Rebels back to Dalton, Georgia.

This talk will examine the significance of A.P. Stewart to the Chickamauga/Chattanooga campaign, both as a participant and in fostering its memory in the formation and early years of the Chickamauga Chattanooga National Military Park.

Annual Luhn Memorial Silent Auction closes following the last speaker. An announcement will be made.

Braxton Bragg abandoned the city of Chattanooga to the Federals on September 9, 1863. By September 17, now heavily reinforced, Bragg was determined to defeat the Union Army of the Cumberland and regain that important city. On September 18, Bragg dispatched multiple columns of infantry across West Chickamauga Creek to try and turn the Union flank and interpose his forces between Chattanooga and Rosecrans’s army. The battle began on September 18, just east of Reed’s Bridge, with fighting spreading to Alexander’s Bridge soon after. The Confederates gained the crossings, but were badly delayed. Even worse, Rosecrans was now alert to his danger. Overnight he shifted George Thomas’s XIV Corps northward to the Kelly Farmstead, countering Bragg’s movement. On September 19, the fighting again opened near Reed’s Bridge, at a place called Jay’s Mill; by midday the battle was general, with heavy losses on both sides. We will explore the fighting on both days.

· Reed’s Bridge – the opening of the battle.

· The Alexander House site – where Wilder’s Brigade was engaged

· Jay’s Mill – the renewal of the fight on September 19

· The monument to Carnes’ Tennessee Battery – where a Confederate battery was destroyed.

· Viniard Field – where the heaviest fighting occurred on the 19th

The fighting on September 19 was heavy, costly, and inconclusive. Neither side gained a clear advantage. Rosecrans, now realizing he was outnumbered, elected to stand on the defensive. Bragg, realizing he had not yet won a clear path into Chattanooga, had to attack. Everyone on both sides expected the bloodletting to begin again with first light, but that did not happen. A series of communications mishaps delayed Bragg’s intended assault, however, and the fighting did not commence until mid-morning. Those first assaults achieved limited success, but again, command problems robbed the Confederates of victory. But a costly Union blunder occurred when Rosecrans sent an order to divisional commander Thomas Wood, an order which created a gap in the Union line just at the moment that General James Longstreet’s Southern troops poured into Brotherton Field. In an hour’s desperate fighting, the Union Right Wing was shattered and a third of Rosecrans’s army driven from the field – including Rosecrans and two of his corps commanders. Only a stubborn defense by George Thomas on Horseshoe Ridge saved the Union from complete disaster. Then, as darkness fell, the Federals retreated to Rossville. We will track the crucial moments of this final day’s action.

· Brotherton Field – The site of “the fatal order of the day,” and the Confederate breakthrough

· Horseshoe Ridge – Where Thomas earned his name: “The Rock of Chickamauga.”

7 to 9 p.m. Mix and Mingle—informal gathering for tour group  guests in the Hampton Inn conference room. Games, music and light refreshments. BYOB. Come and go as you like!

On September 21, the Union army retreated inside the fortifications of Chattanooga. Unable to take the city by storm, Bragg resorted to a siege. For two months, the Confederates controlled the high ground on the south side of the Tennessee River, slowly starving the Federals inside the town. At the end of October, the Federal supply line was reopened by Union General Ulysses S. Grant, via the actions at Brown’s Ferry and Wauhatchie; but the Rebels continued to control Lookout Mountain and Missionary Ridge. It would take a series of assaults at the end of November, including a dramatic charge up Missionary Ridge, to finally drive the Army of Tennessee away from Chattanooga. Given that most of the Chattanooga battlefields are inaccessible by bus, we will spend some time seeing what we can of Chattanooga.

· Wauhatchie – a rare night fight that saved the Union army.

· Orchard Knob – Grant’s command post for the battle of Chattanooga

· National Cemetery – final resting place of 12,000 Union dead, including 1,500 who fell at Chickamauga.