*Early Bird Pricing - Save $30 when you register for the Members or Non-Members Conference Package by Nov. 1, 2019. Use code EARLY30 when registering online. 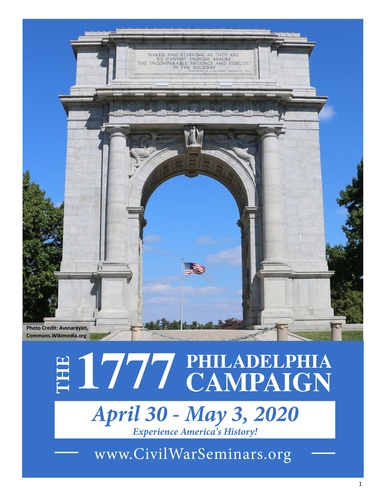 CANCELLED
To help prevent the spread of COVID-19 and to honor the social distancing guidelines presented by the CDC, we are cancelling our 1777 Philadelphia Campaign conference scheduled for April 30 - May 2 in King of Prussia, PA. The health and well-being of our patrons and team are our highest priority, and we feel this is an unfortunate, but necessary decision. We will be in touch regarding the refund process.

We plan to host this conference in spring 2021 with Michael Harris, and those details are in the works. We wish you and your family health and strength under these difficult circumstances.

Click here for the brochure and pricing: The 1777 Philadelphia Campaign.

Welcome to our spring 2020 program, The 1777 Philadelphia Campaign. This is the first of our spring programs that will be dedicated exclusively to a campaign other than those of the Civil War. We expect our future spring programs to address other campaigns of American military history. We are excited about this unique program, which will be dedicated to one of the most important campaigns of the American Revolution, and which featured the largest set piece battle of the war, the September 11, 1777 Battle of Brandywine. We’re pleased to be able to present this program in Valley Forge, where the Philadelphia Campaign ended. We have a fantastic array of tours and talks to present to you featuring the leading experts on these events.

· Conference based at Holiday Inn Express  at 260 N. Gulph Rd., King of Prussia, PA 19406.
· Deluxe continental breakfast for Holiday Inn Express guests each morning.
· Check-In will be in the hotel lobby about 1 hour before the day’s activities begin. You only need to check-in once.
· Each participant will receive a packet of tactical maps and a name badge at check-in
· Classroom sessions will be held in the Holiday Inn conference room.
· Bus tours will leave from the Holiday Inn parking lot at the specified time.

·  “An Opportunity of Annoying Them Greatly” The Battle of Cooch’s Bridge (3 September 1777) - The Opening Engagement of The Philadelphia Campaign and the Invasion of the Upper Delmarva Peninsula - talk by Wade P. Catts, RPA,
The opening engagement of the Philadelphia campaign, the Battle of Cooch’s Bridge (or Iron Hill) was a short but spirited engagement between the vanguard of the British army and an American Light Infantry Corps. The presentation integrates historical, topographical, and archaeological studies into a discussion of the battle and its context, using contemporary British, Hessian, and American accounts to reconstruct the course of the engagement, the landscape over which the battle was fought, and the battle’s outcome.

· “The Struggle for the Delaware River—Fall 1777” talk by Ed Greenawald
This talk will: describe the passive, physical defensive measures installed by the Patriots on the Delaware River, position the three Patriot forts along the river channel below Philadelphia, describe the British & Hessian assaults to capture them and describe the opposing asymmetrical naval forces and their major actions on the river.

· “Remember Paoli” - talk by Jim Christ
"Remember Paoli", it is the nation's first battle cry and was born of the battle that was fought in Malvern, PA on night of September 20th, 1777. Learn about how British General Charles "No Flint" Grey lead around 2,000 men at night into the Great Valley to surprise over 2,000 of General Anthony Wayne's men and 2,100 Maryland Militia under General William Smallwood. The ninth bloodiest battle of the Revolutionary War left Philadelphia open to British occupation, and also left a lasting impact in the local community. In 1817 the second oldest War Memorial was dedicated and is still remembered today with the Malvern Memorial Parade. Let's explore why this battle is called the "Paoli Massacre," as well as common myths such as soldiers being asleep during the attack. General Anthony Wayne would get his reputation back during the Battle of Stony Point, NY in which he used lessons learned from the Paoli Battle to earn a complete victory and international acclaim.

8 - 9 a.m. Pre-Bus Tour Lecture: Overview on the opening of the campaign including sea voyage, Continental indecision, Cooch’s Bridge, Brandywine, Battle of the Clouds, Skirmish at Valley Forge and Paoli.

Bus Tour Description:
Our first bus tour day will focus on August 25-September 21, 1777.  This period covers the British landings in northeastern Maryland, the engagement at Cooch's Bridge in northern Delaware, the Battle of Brandywine, the Battle of the Clouds, the September 18, 1777 skirmish at Valley Forge and the Battle of Paoli.
Sites to visit:
· Cooch’s Bridge Site— site of the first land engagement of the 1777 Philadelphia Campaign. It was the first ever engagement in which the American light infantry were engaged.
· Brandywine Battlefield -  site of the largest land engagement of the American Revolution.
· Birmingham Hill - walking the site of the heaviest fighting.
· Paoli Battlefield - where Anthony Wayne’s continental division was surprised and overrun in the middle of  the night by a British assault column. This is arguably the site of the oldest battle monument in the country.
· Washington Headquarter site at Valley Forge—today, Valley Forge National Historic Park is preserved as the site of the Continental Army’s 1777-1778 winter encampment. This stop will focus on the skirmish that took place here on Sept. 18, 1777 near the future site of Washington’s headquarters involving Light Horse Harry Lee and Alexander Hamilto.n
· And more!


The rest of the evening is yours to explore the area.

Bus Tour Description:
Our second bus tour will focus on the efforts by the British high command to combat American fortification along the Delaware River and open access to British shipping.  This tour will focus on early October through mid November, 1777 and the sites of Fort Billingsport, Fort Mercer, and Fort Mifflin.
Sites to visit:
· Fort Billingsport—As the British began efforts to open up the Delaware River to British shipping in October 1777, Fort Billingsport was the first American position to be assaulted.
· Fort Mercer and Whitehall House—earthwork at Fort Mercer was the site of a massive Hessian assault on Oct. 22, 1777 in a further British effort to open the river to British shipping.
· Fort Mifflin—while Fort Mifflin was significantly altered in the years following the American Revolution, the site witnessed one of the most sustained sieges of the war in October-November 1777 and witnessed heroic efforts by Continental soldiers to defend what was once an island fortification.
· And more!

8 - 9 a.m. Pre-Bus Tour Lecture: Lecture on second half of the campaign including the occupation of Philadelphia, Battle of Germantown, Engagement at White Marsh and Valley Forge.

Bus Tour Description:
Our third and final bus tour will focus on the land campaign of September 22 through late December 1777.  This period covers the Battle of Germantown, the engagement at Whitemarsh, and the eventual encampment at Valley Forge.

Sites to visit:
· Peter Wentz House—the site of Washington’s headquarters prior to the Battle of Germantown and where he planned the assault on the British garrison at Germantown.
· Cliveden—the home of Benjamin Chew where numerous American assaults were launched on the house that was held by a small British force during much of the battle.
· Valley Forge National Park—site of the American winter encampment during 1777-1778 and where Baron von Steuben famously trained the Continentals to be a professional military force during much of the battle.

Chambersburg’s Civil War Seminars & Tours has raised over $210,000 for preservation since our founding. A portion of the proceeds from this event will be donated to nonprofit organizations associated with our tour. Please support our raffles and silent auctions as all funds raised from these efforts are donated to preservation.